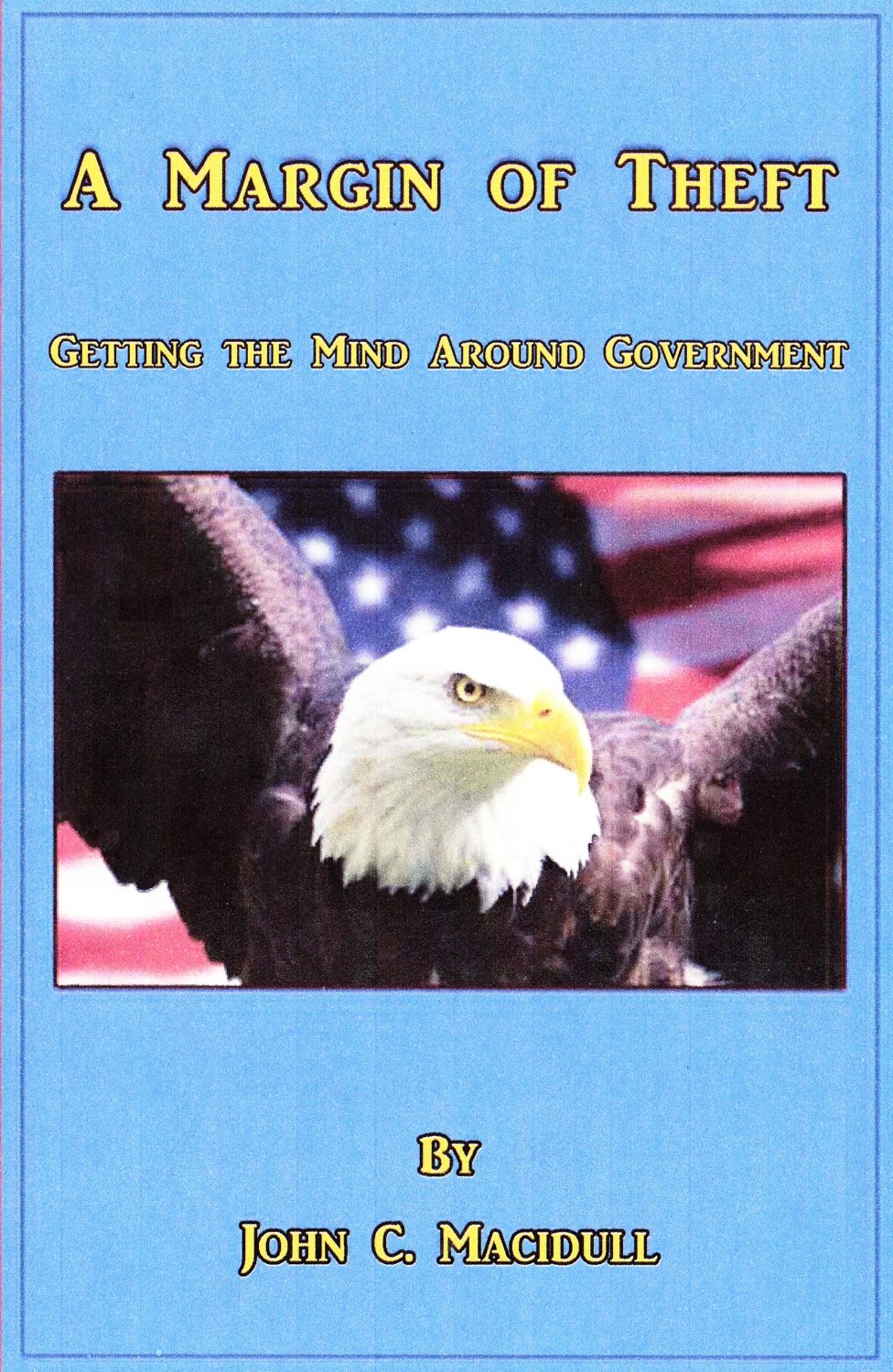 Book: A Margin of Theft

“A Margin of Theft: Getting the mind around government” (AMOT) conveys a perspective, a metric, for judging the motivations of people, organizations, corporations, and states. While John Macidull claims this isn’t a philosophic—but engineering—analysis, I humbly disagree. Philosophy means the love of wisdom. And there’s something very wise going on with this book.

Macidull has an extensive resume (see here: http://www.macidull.com/bio.html) that includes holding patents and flying aircraft. He has an engineering mind. Engineers love parsimony: the simpler the design, the less that can go wrong with it. But as he’s said in AMOT, deriving a simple solution is often a complex task.

Macidull meditated on what motivates people and he thought “desire.” What do people want? Some people crave fairness, as long as they can still survive. This constitutes profit, which is an agreement between two parties to exchange goods or services.

People, however, often want more than just to survive, more than what’s fair, more than what was agreed to. In short, some people become greedy and move from the spectrum of profit into the margin of theft. Theft occurs when the exchange of goods and services wasn’t agreed to by both parties (consciously). You can secure someone’s “permission” legally without the other party agreeing with complete comprehension and lucidity. For example, a man can be tortured until he “signs” a declaration of guilt. Native Americans, as another example, unwittingly legally signed away the rights to their land (even though they never thought of land as property).

This continuum of desire can eventually enter the margin of insanity or bankruptcy, when the theft has become so acute that it’s beyond theft. It’s harmful to everyone. It’s insanity, for example, to send our American forces into an immoral and unwinnable war. This isn’t merely a misleading arrangement when motivations cross into the margin of insanity; it’s irrational, destructive desire that’s a disservice to humanity. It’s, well… insane.

Macidull puts into context so much within this framework of profit to theft to insanity, including the following: entertainment, gambling, children, food, marriage, religion, sex, science, economy, education, energy, defense, drugs, freebees, jobs, politics, taxes, toll roads, and more. He admits in the beginning of his book that everyone’s “MOT meter” will be different and that no history is ever completely objective, but that doesn’t mean we ought not to try. Nothing is ever perfect, after all, but that doesn’t mean we’ll try our worst. We should strive—or maybe that’s not the right word—we should reach for perfection, for impartiality, even though we know we’ll never actually get there.

I love Macidull’s idea that we could download a MOT meter application to our smartphones so that for every news story, there’d be a ranking. He doesn’t precisely address who should decide where the needle on the MOT meter points, but I’ve a feeling that he wouldn’t be opposed to a democratic system that averages the group consensus (and, perhaps, can be split up for different demographics, politic views, etc.)

Speaking of things I love about AMOT, he has a complete appendix of words he’s made based off the acronym of his book. Some gems: “MOTus Operandi, MOTifications, MOTsters, and Jabba the MOT.”

I highly recommend this book if you want to try on a viewpoint from a brilliant, engineering mind. It’s cogent; it’s compelling; and it’s conscious of the desirous human condition.

2 thoughts on “A simple, yet brilliant, perspective for identifying motivations”